You are here: Home1 / Uncategorized2 / Conscience: The Duty to Obey and the Duty to Disobey — Authored... 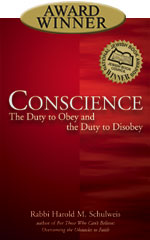 “Conscience may be understood as the hidden inner compass that guides our lives and must be searched for and recovered repeatedly. At no time more than our own is this need to retrieve the shards of broken conscience more urgent.” (from the Introduction)

This clarion call to rethink our moral and political behavior examines the idea of conscience and the role conscience plays in our relationships to government, law, ethics, religion, human nature and God—and to each other. From Abraham to Abu Ghraib, from the dissenting prophets to Darfur, Rabbi Harold Schulweis probes history, the Bible and the works of contemporary thinkers for ideas about both critical disobedience and uncritical obedience. He illuminates the potential for evil and the potential for good that rests within us as individuals and as a society. By questioning religion’s capacity—and will—to break from mindless conformity, Rabbi Schulweis challenges us to counter our current suppressive culture of obedience with the culture of moral compassion, and to fulfill religion’s obligation to make room for and carry out courageous moral dissent.

“Remarkable…. Eloquently makes the case that faith can never be passive; it must assault our conscience and push us to do right.”
—Rabbi Eric H. Yoffie, president, Union for Reform Judaism

“Clearly reveals a new depth of understanding of the gift of partnership in creation afforded by God to His beloved children through the exercise of moral consciousness and ‘fear of God.’”
—Archbishop Hovnan Derderian, Armenian Church Western Diocese

“Learned and thoughtful … demonstrates that conscience constitutes the vital core of Judaism, challenging us in our complacency and inspiring us to transform morality into deeds.”
—Professor Susannah Heschel, author, Abraham Geiger and the Jewish Jesus

“Calls on us to recognize that sometimes the promptings of our conscience are more authentically the voice of God than the words of our tradition.”
—Rabbi Harold Kushner, author, When Bad Things Happen to Good People

Rabbi Harold M. Schulweis, one of the most respected spiritual leaders and teachers of his generation, has been a rabbi at Valley Beth Shalom in Encino, California, for close to forty years. He is the founding chairman of the Jewish Foundation for the Righteous, an organization that identifies and offers grants to those non-Jews who risked their lives to save Jews threatened by the agents of Nazi savagery. He is also the founder Jewish World Watch, which aims to raise moral consciousness within the Jewish community. Synagogues and other religious institutions are now supporting this effort across the country. Rabbi Schulweis is the author of many books, including: Approaches to the Philosophy of Religion, For Those Who Can’t Believe, Finding Each Other in Judaism, In God’s Mirror, and two books of original religious poetry and meditation—From Birth to Immortality and Passages in Poetry. His Evil and the Morality of God is regarded as a classic.

Want to join the discussion?
Feel free to contribute!

Adonai / Elohim – A Sermon by Rabbi Harold M. Schulweis The History of Jews in the Ottoman Empire
Scroll to top @2021—HMSI Institute