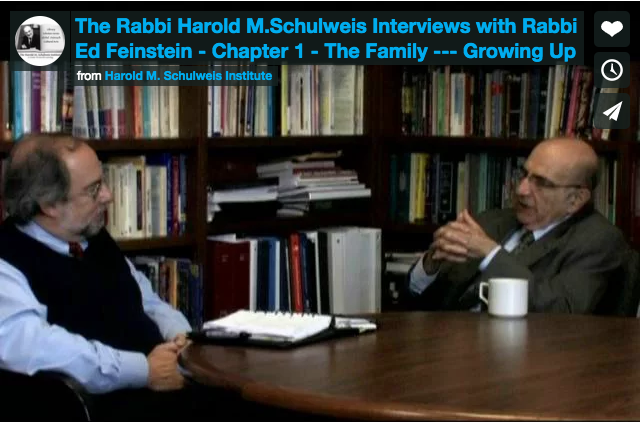 “Wouldn’t it be wonderful if we had videos of Moses Maimonides discussing his life and theology with us?  I want that opportunity with Rabbi Schulweis.”  So spoke Rabbi Ed Feinstein in 2008 when he conceived of a project to sit down with Rabbi Schulweis and interview him in a series of video sessions.  Rabbi Schulweis gladly accepted the invitation saying..”Rabbi Feinstein is the finest interviewer I have ever met.  He will cause me to discover things about me that even I didn’t know.”

The project resulted in 13 edited video recordings distilled from over 8 hours of interviews. They reflect the Rabbi’s thoughts on his relationship with his wife Malkah, the influence of his grandparents on his theology, his experiences in Berkeley and Oakland during the 1960’s, his views on the continuing evolution of Jewish practice, and his involvement in the evolution of an engaged Jewish community at congregation Valley Beth Shalom in Encino, California.

Each interview was recorded and deals with a specific topic.

The complete set interviews is available in the archive.

BELOW are links to each of the interviews, and a summary of the topics covered in each interview.

Chapter 1–The Family, Growing Up

Chapter 9–The God within God

Chapter 13–Coming to VBS, Birth and importance of the Havurah movement